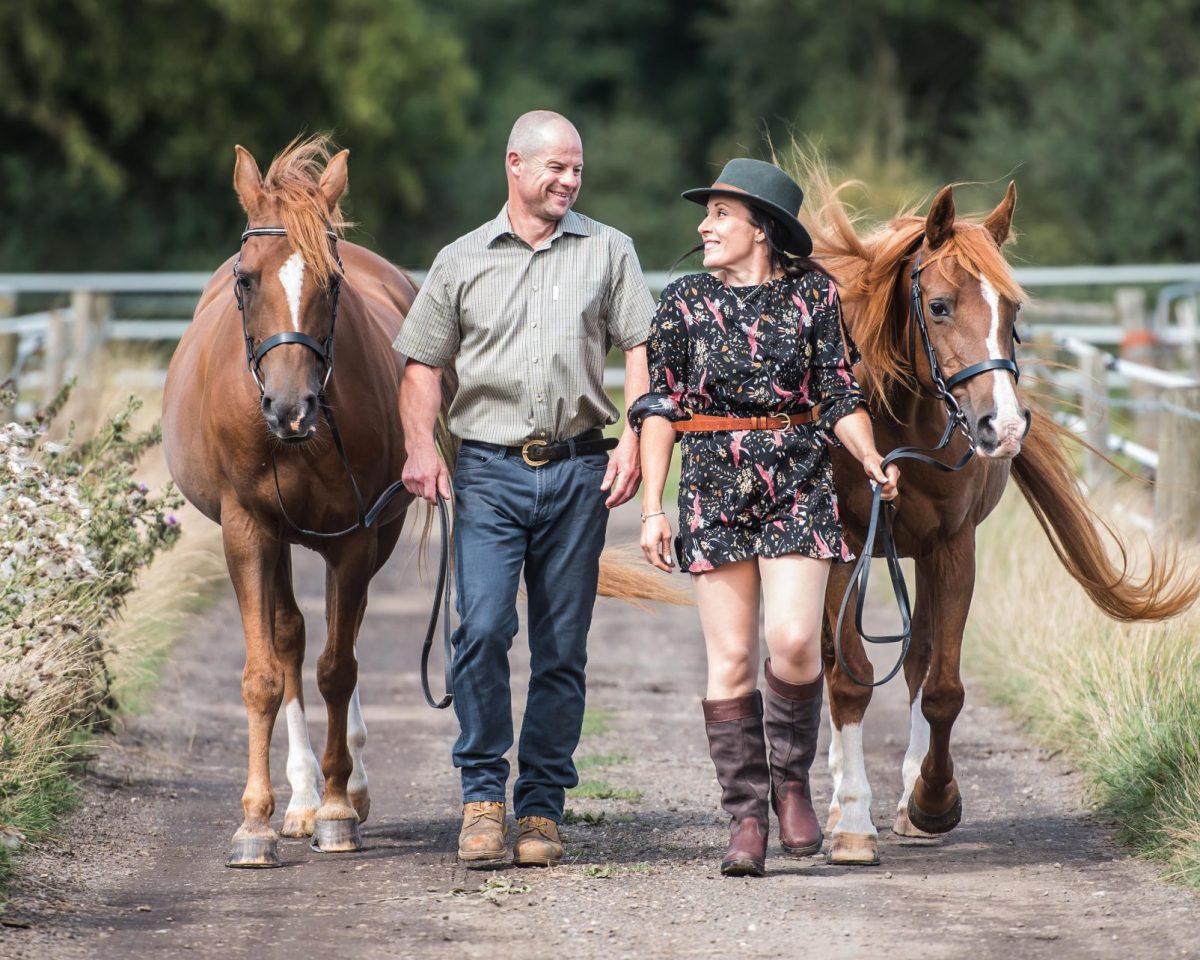 I’ve never been a fan of the camera, I am just not photogenic. Although, however much I am camera shy, Barry is 10,000 times more! It’s not a very helpful aversion to have in this world of social media where we are encouraged every day to put our faces out there!

Barry and I have spent the occasional hour here and there trying to take selfies and photos of each other. Usually every image taken is met with some variant of “Ew no not at from that angle”, “Do I really look like that?!”, “Please crouch down and make me look taller!” “What even is that?!” from either one of us. Every time we end up vowing afterwards to just not bother. It’s all a bit too painful a waste of time when we could be making and creating.

Ah the creating! That should be an easier way to get images right? Wrong! Ohh when you’re just using the phone on your camera and detail goes a bit grainy when you zoom in so you try and get just that bit closer… Oh my life I’ve nearly had my phone smashed by a hammer, been hit by scalding hot scale flying from a shoe, phone deciding to focus on feet rather than anvil, nearly blinded by flying filaments from brushes… It took such a long time to get a photo we were even half happy with. The majority passed with the comment “that’ll have to do”. 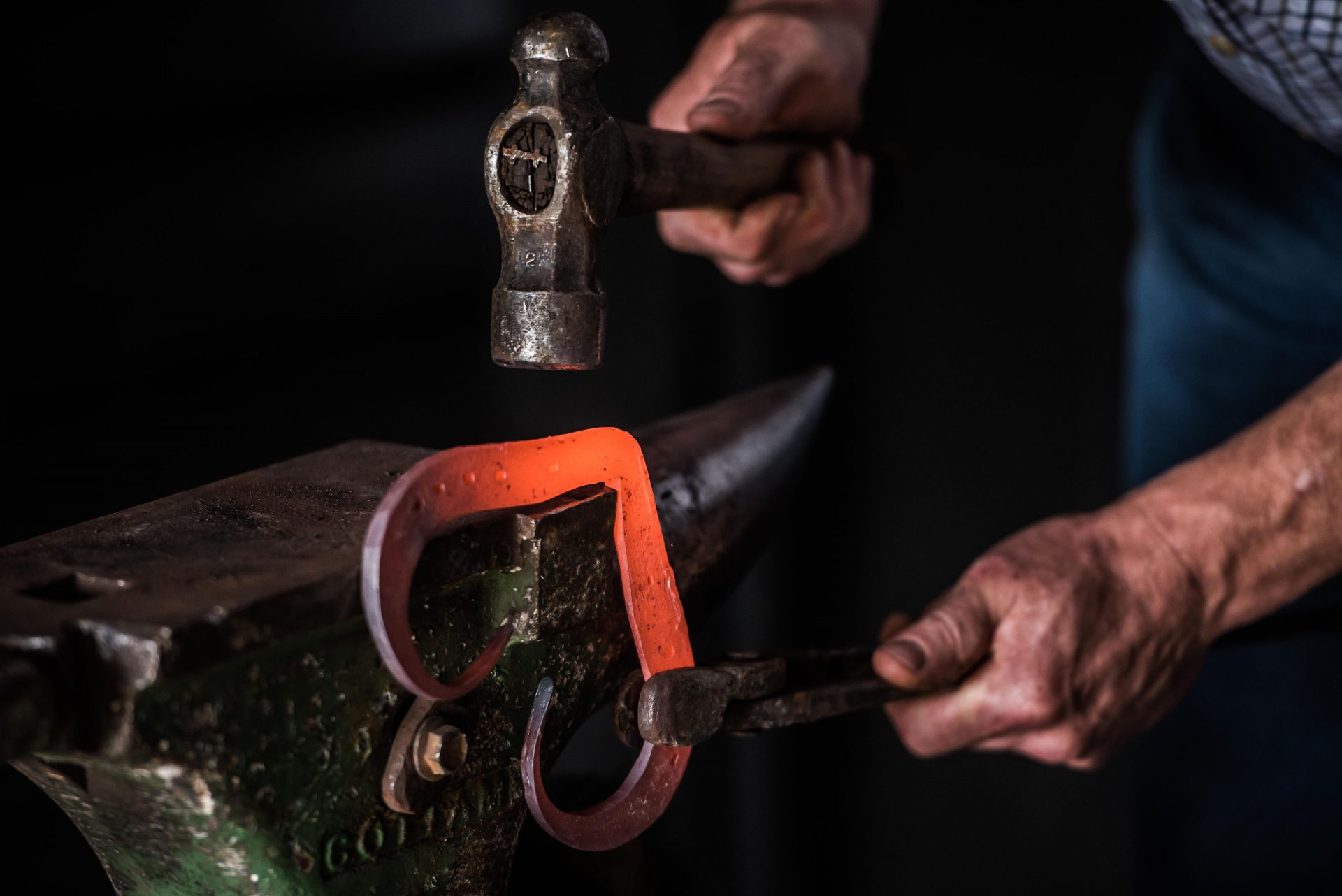 Then I read Rhea Freeman’s blog about her shoot with Sophie Callahan in 2018. Rhea described all her misgivings and insecurities about being in front of the camera and I could so relate. Yet the images from her shoot were fabulous and she had enjoyed herself! Plus, and big enormous plus, she had some beautiful images of her two horses, Gu and Marilyn.

I began to think that perhaps this could be the answer. Some images to treasure of our ponies who really are a big part of our “why” along with some “Behind the Scenes” forging shots. When Sophie announced limited shoot dates for 2019 as at the time she was expecting the lovely Mollie (who is now over 6 months old?! How does time fly that quickly?!) I acted on a sudden brave impulse and booked our shoot.

You’d have though having booked in February for an August shoot we’d have been organised for it right? Wrong again! I don’t know if it’s having kids, two dogs, three cats and six ponies that means there is always some spanner in the works to be had, but that is generally how things roll here. Unexpected event follows unexpected event, my mum assures me this is something to do with planetary alignment making things chaotic but by golly it’s been going on for some months now and shows no sign of abating.. anyway…

We had organised two outfits. While that was a struggle the dragged through a hedge backwards look of day to day life wasn’t really one I wanted immortalising, so we did put a bit of effort into that! We had washed the six ponies (which as any horsey person knows – gleaming pony = dragged through a hedge backwards owner!) the previous day and we were eagerly awaiting Sophie’s arrival. To be honest both Barry and I were a bit anxious and had a bit the “Let’s get this over with” feeling about us. I should add too, literally days previously we had the sixth member of our herd return from a loan home. The ponies were all a bit stirred up and still sorting out hierarchy and I was a bit nervous on what gems they may pull out of the bag! 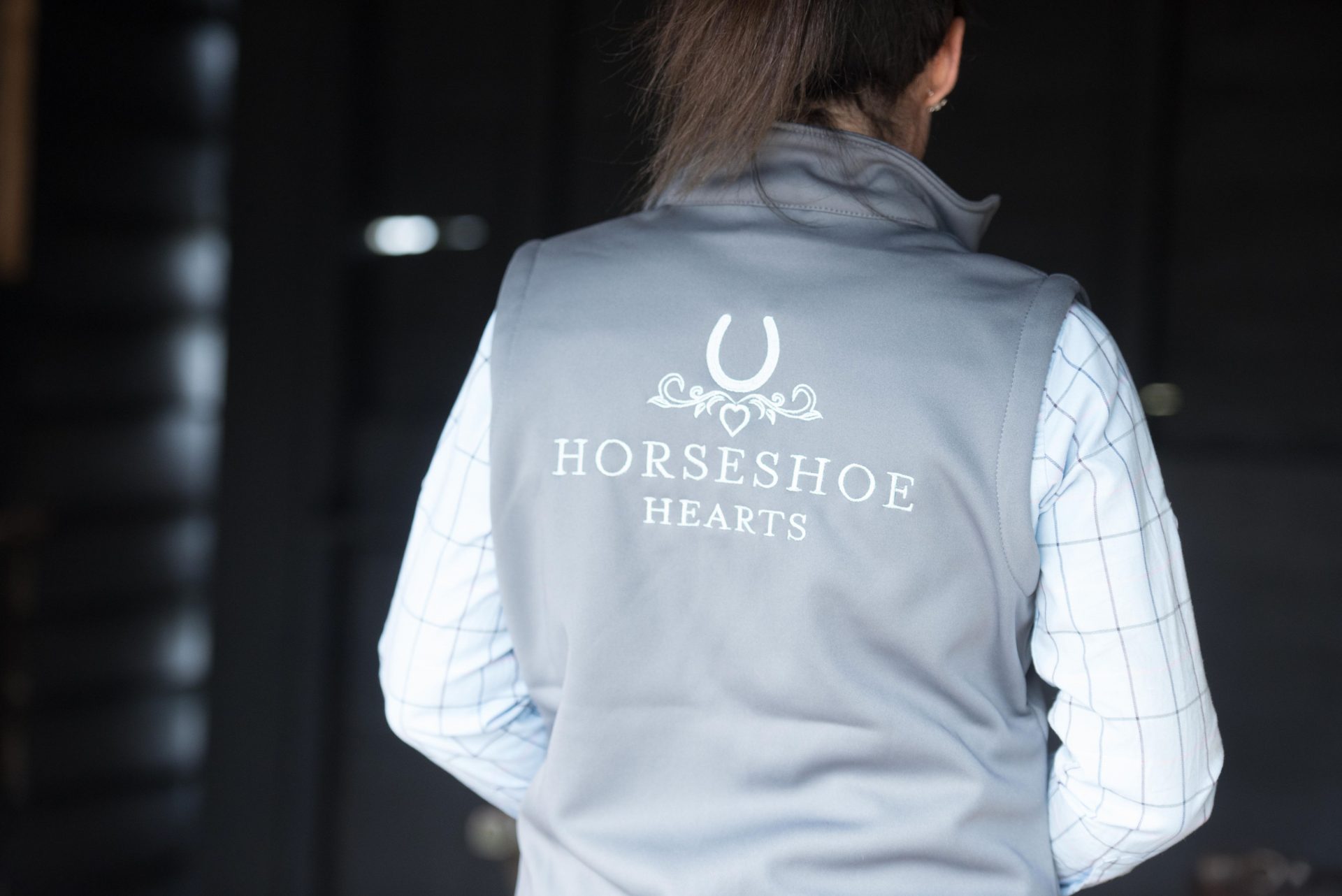 But by the end of the day we didn’t want it to end! Seriously! Any worry we had about anything just dissolved. I am still hoping we may manage another shoot in 2020! We loved it that much.

Sophie arrived and immediately put us at ease. She has such an experienced eye, she already assessed on her arrival which areas would work from a lighting perspective. So we didn’t need to worry at all about where to take the photos. We basically spent a couple of hours hanging out with our ponies. That’s it. Laughing at them, and each other. Marvelling at the miracle of us and them all being reasonably clean while Sophie snapped away, often without us even noticing.

I was in my element telling stories about each of our ponies, describing their personalities, histories and generally fangirling over them. Isn’t telling a captive audience all the stories about your horses that you normally need to rein in in every day life the best thing ever?!

I had settled to the idea that it would be fine even if there were some hiccups with pony behaviour. Sophie did assure us that she had plenty of tricks up her sleeve for getting the attention of rather distracted equines and reassured us that she really had seen it all over the years and any antics usually made for fantastic ‘outtake’ shots. 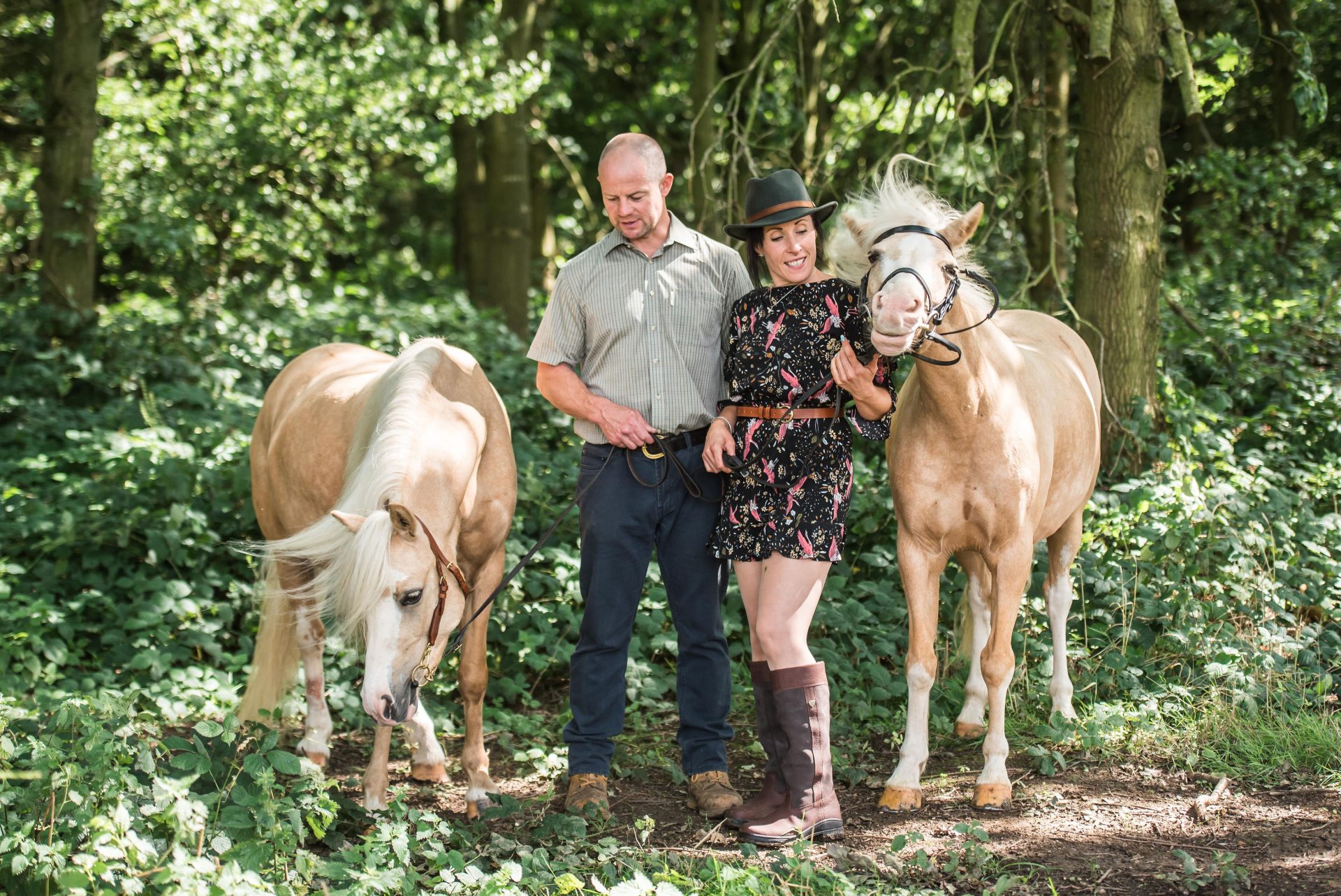 When we had finished with our four footed family, who I have to say excelled themselves in the behaviour stakes that day, we moved on to some forging..

This bit was also great fun. There was no tripping over each other as we tried to get images. We were just free to get on and work with the shoes as we would normally (though dressed a bit more smartly!) Sophie was a safe distance away to avoid any hammers, hot shoes and flakes of scale. We again chatted away. This time Barry was in his element talking about horseshoes, blacksmithing, how Horseshoe Hearts came about and our hopes and plans for the future. In no time at all it was time for Sophie to go.

Barry and I turned to each other once she had left and he said “Well that was alright wasn’t it?” and I, equally surprised replied, “I want to do it all over again!”. That was before we had even seen the photos.

Sophie gave us a few sneak peeks over the next few days and when I saw the first, which is the title image of this blog, I shed a tear. If you are hyper critical of yourself in photos you will know that feeling of relief and almost disbelief when you like an image with you in it! I didn’t just like it, I loved it! With each and every teaser image that followed we were thrilled. Not only with those taken with our horses but those too of us working. The sharpness, the quality, the beauty of the forging that is an art unchanged of hundreds of hundreds of years. Fire, anvil and hammer as it has been from the very beginning. 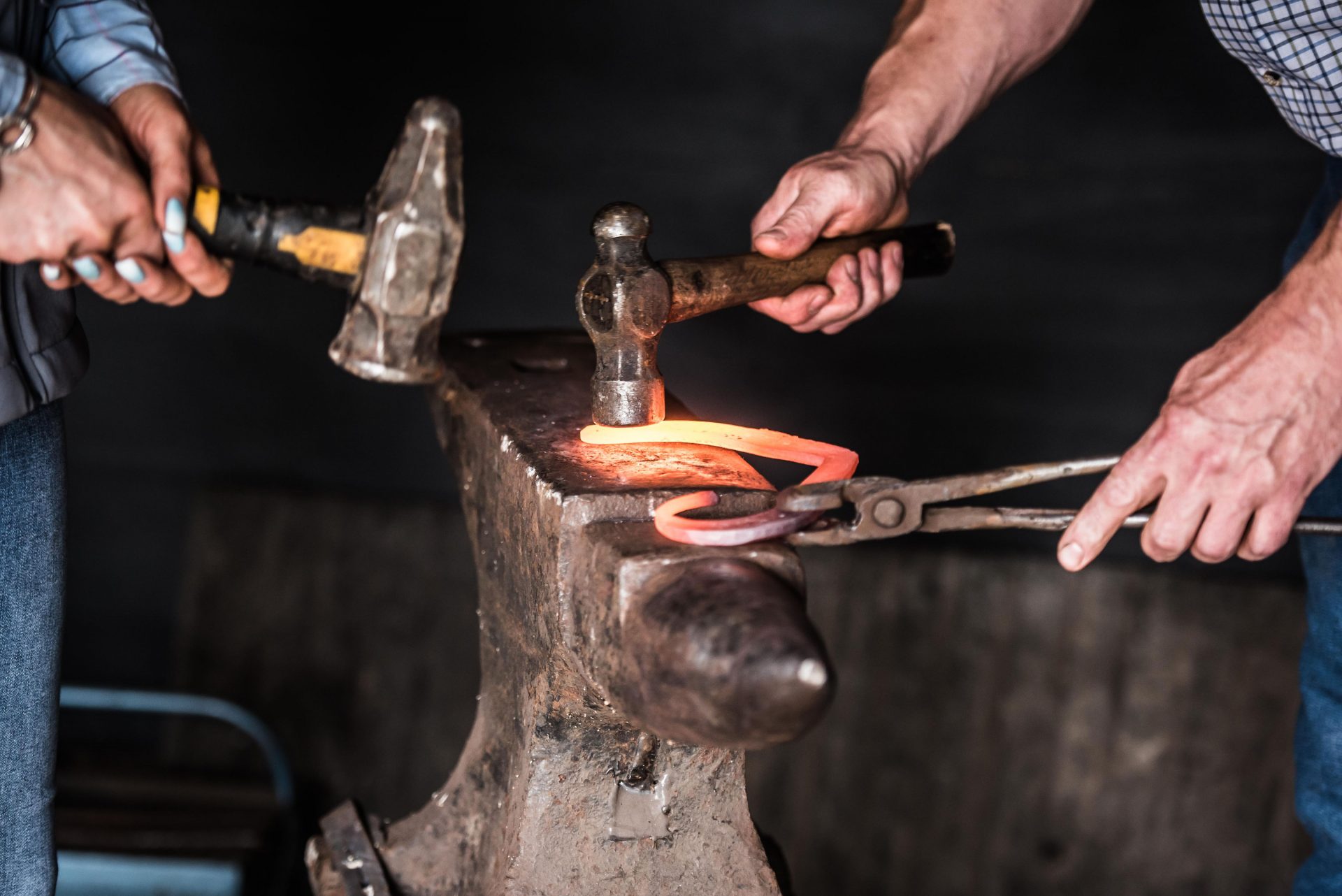 I cannot say enough how grateful we are to Sophie for putting us at our ease and giving us not only really useful images from a brand perspective but also ones we will treasure for always.

If you’ve been in any doubt, especially if those doubts are in part because of camera shyness and don’t like having the focus on you, we really would recommend booking a professional photographer for a shoot. While it seems contradictory I think it is the answer to breaking the habit of always cringing at photos of yourself. Of course we couldn’t recommend Sophie more highly! You can find her at www.sophiecallahanblog.com and on Facebook @SophieCallahanPhotos and on Instagram at @sophiecallahan 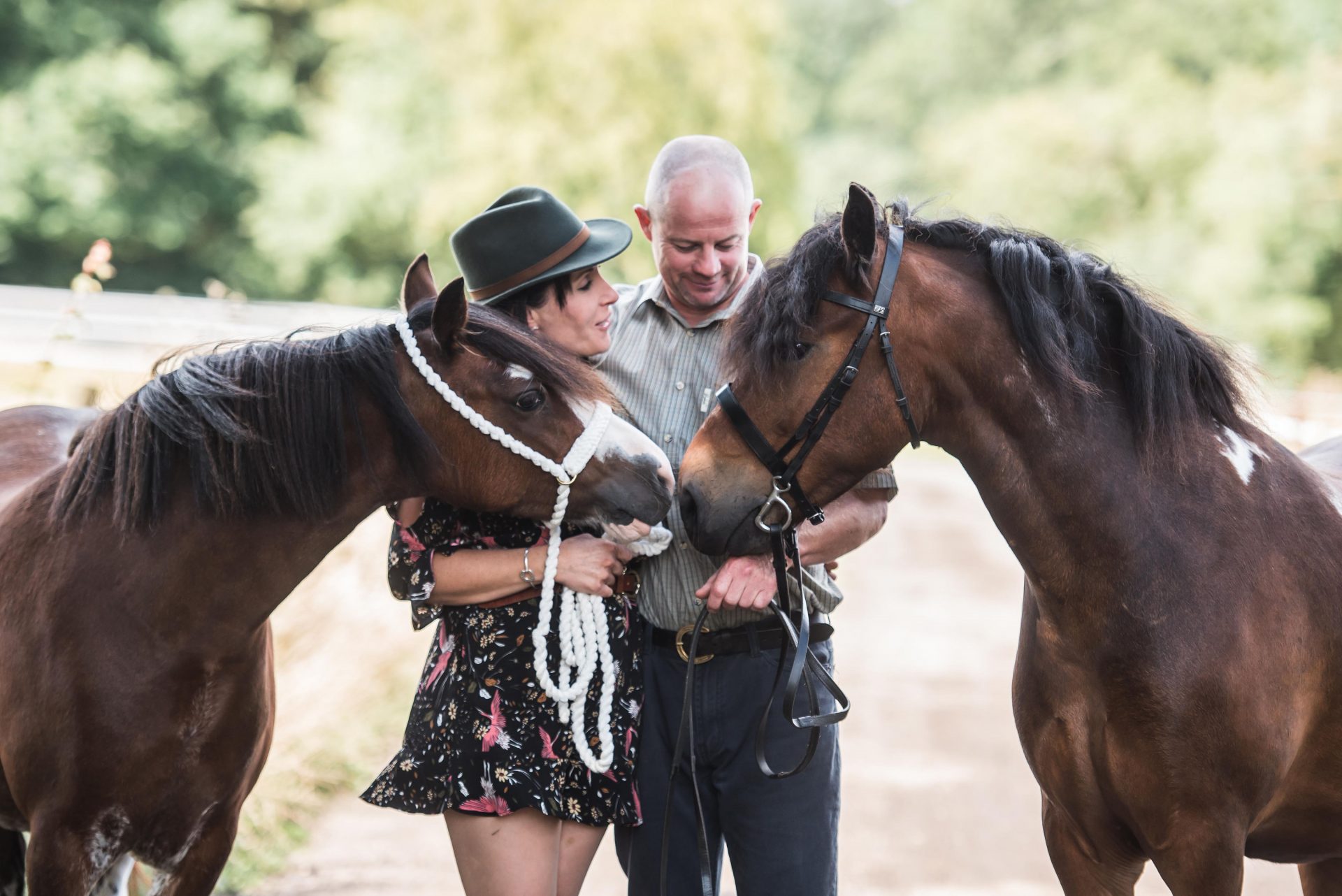