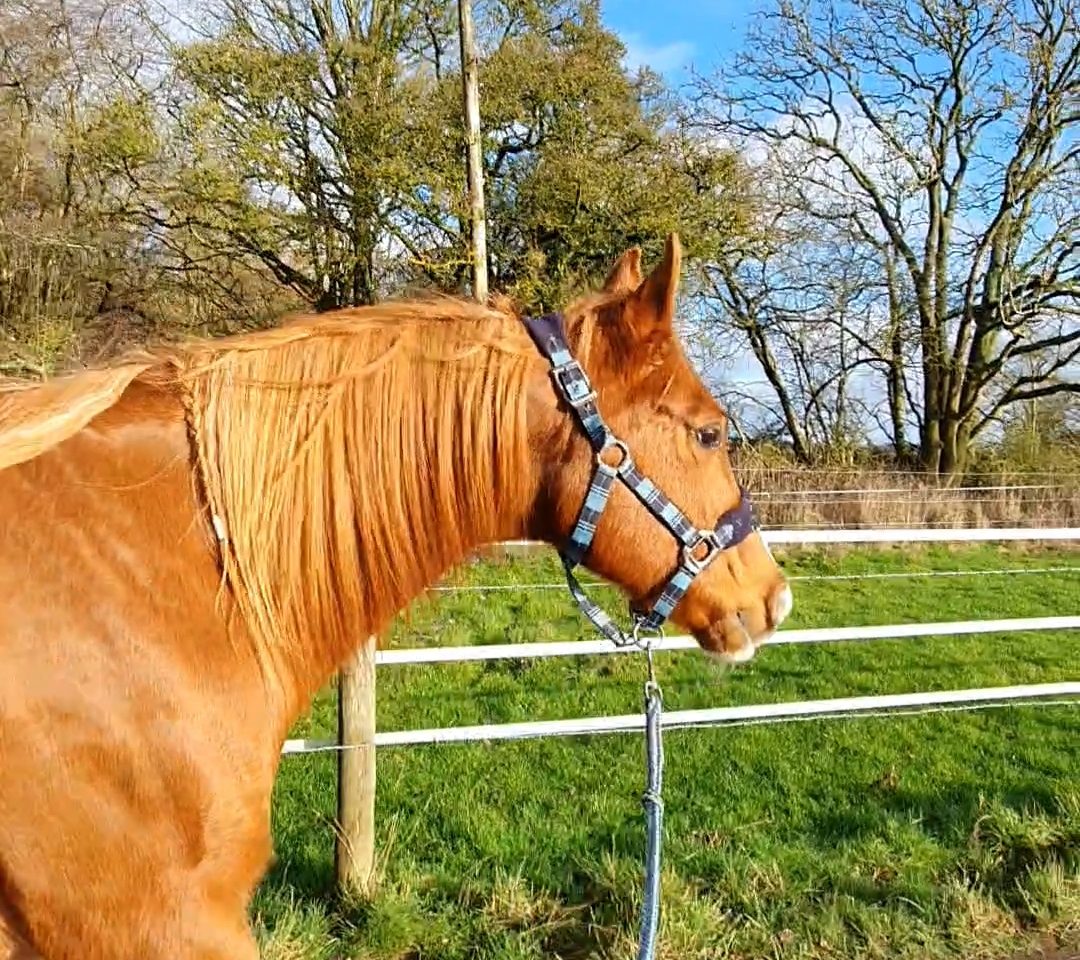 Colic striking when of your beloved equine friends is never ever welcome. When you are self employed and at your busiest time of the whole year, it seemed to be a bit of a double blow. That is exactly what happened on the 16th December 2019. This is the first time we have experienced colic first hand in one of our own.

Barry was at the yard forging, I was at home prepping and packing orders when he called me mid morning. “Skittle’s not right. She keeps lying down and getting back up again. She’s nibbling food but she’s not right.” My stomach dropped. “Call the vet”, I replied. “Just call them. I’ll be on my way.”

There a few things you should know about Skittle. She is stoic. She is the archetypal head mare. She’s ginger, she’s feisty. But if you stop and view things from her perspective she is, most often, fair. She came to us after her increasing age made her find her previous life on a riding school very hard. It was time for some creature comforts for a lady who had given so much to others. We love her. She is the glue that holds us all together. You can imagine how my stomach dropped on hearing those words.

Dear Barry, being a farrier he has seen a lot, but being alone and worried with our poorly girl was a bit much and  I found him tearful on my arrival. Making my upper lip for that time at least a bit stiffer! Skittle would nibble at her hay and then she would stop and her ears flick back and her legs buckle as waves of pain came interspersed with calm where she would nibble again bless her. 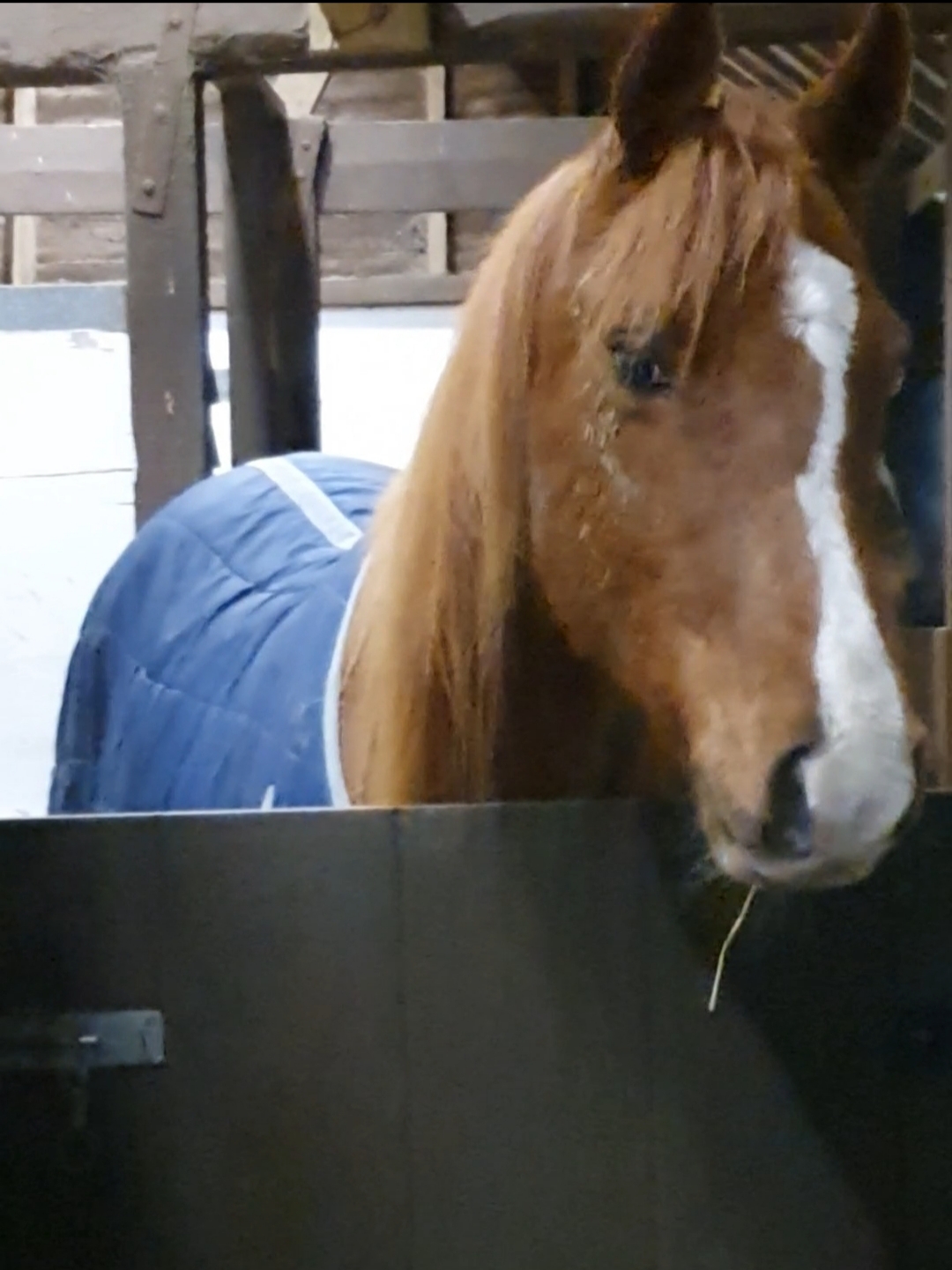 Looking for food and alert despite being very poorly

On the vets arrival and rectal examination showed an impaction and the bowel lying slightly out of place over a ligament, I forget it’s name. Painkiller and meds were given and the instruction for very watery mash feeds with the removal of hay and lunging to try and get the bowel to move. At 8pm we had lose sloppy poo and we rejoiced. For fear of her eating her straw bed overnight and not having anything else to bed her on we turned her out at 10pm hoping that wet grass was a far less risk than dry straw. We returned home to continue packing orders and Barry went to check her at 1am and found her comfortable and calm and dosing with Bear stood guardingly beside her. We felt relived and snatched a few hours sleep ourselves.

But on returning early the next morning it became apparent that it wasn’t to be solved so easily. She was wet with rain and liquid mud head to toe where she had gone down in the field. Vet out again and the sinking feeling returned. No change. Impaction still present and intestine still over ligament. The poo that has been passed must have just managed to get round the impaction and the painkiller made her peaceful for a time. False security. Lunging every hour was the course of the day and in between we forged, and worried, and lunged, and forged. It’s a funny thing when it isn’t your horse I think you have the emotional distance to do what is required but I must admit I couldn’t see for rain and tears as we went into the afternoon, Skittle tired and my having to chase her to get her moving in the hope we would get that bowel to move. Knowing all the while how, no matter what we had going on, we had orders to make and send out and couldn’t let people down at Christmas time.

Vet came at 3pm and no change. Skittle was exhausted. I’d sworn I would never put her through surgery and at her age. But our Nikki, our vet still thought it was worth sending her to RVC as they would lunge her throughout the night. I felt awful the thought of doing it to her but her vitals were good. Heart rate good and strong. So next came the travelling. We had tried numerous times to get her used to the trailer years previous, even just stationary but she made it really rather clear she would rather not and at her age we figured we didn’t need to. Sedation was given, trailer prepped out of eyesight and… she walked straight on. My darling girl. 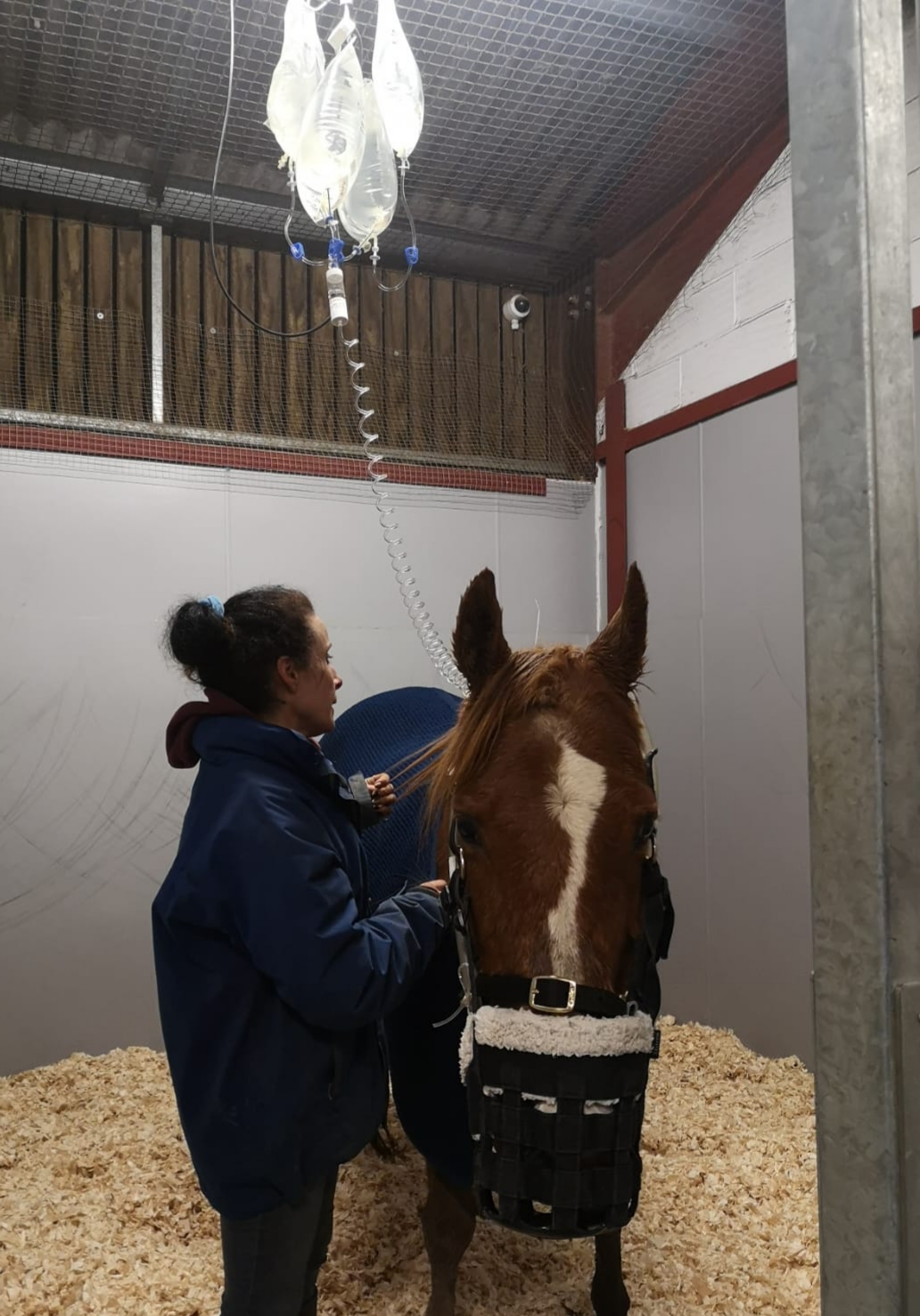 She neighed and neighed the whole journey to Potters Bar, fortunately it wasn’t far, half hour or so. I just remember the dark, and the headlights and the driving rain. Because yes, all it was doing even then in December was raining! They were expecting us at RVC and were super efficient the moment we arrived, weighing Skittle on the weighbridge and taking her through those big sliding doors into their horsey sized hospital while we filled in paperwork and waited.

We sat together like worried parents over her. Drinking a welcome cup of tea (what a joy just the offer of a cuppa can be, thank you RVC reception) looking like drowned rats. Having been forging and lunging in a wet and muddy field all day (we have no menage) we must have been quite a sight to behold.. not in a good way!

The RVC vets came to update us, Mike and Rose, if my memory serves me correctly. Mike was quite positive. She was strong in herself still, good gut sounds despite the impaction in the pelvic flexure, which I think is most commonplace for impaction to occur. “And where the guts are lying?” I tentatively asked? “Fine, fine” was his response “they are where they should be.”  The general thought was the trailer journey had moved it. Apparently it’s another thing that is worth try if you have a horse with displaced colon, there is nothing to lose after all to try. Ohh good god my heart leapt. No lunging all night. It was just the impaction we were dealing with now. ‘Come on warrior woman you can do it.’ If only you could make them well with your will it would be so much more straight forward wouldn’t it?

We waited while she was set up with IV fluids as well as stomach tubes and then went to say Good night to her. I felt so guilty leaving her there but knew she was in the best place. They would update in the morning all being well. We went back to the yard to sort out our other ponies and I think it was around this point we put a post up asking for if anyone had non time sensitive orders that were not for Christmas to reduce the load a little. Many people were so very kind saying they could wait and sending messages of support and well wishes for Skittle. We were so incredibly grateful for each and every one of them. We crawled into bed, made sure phone volume was on and prayed for no calls from the RVC until morning. That was the 17th December. The next few days seemed to last an age.

Feeling better but very stressed at the RVC

We didn’t really have a chance to dwell as we were so busy prepping and packing and sending orders it was just non stop. I confess to having a bit of a life long battle with anxiety, one that I always overcome and have learnt plenty of tools to deal with, but those days my hands shook writing Thank You notes and addresses. I struggled to eat and Barry and I took it in turns I think to have wobbles and then encourage each other on. Three nights she stayed at the RVC without good news and our knots of anxiety tightened further but we used this time while she was being nursed there to get all the orders, customer’s gifts to others, dispatched. It was that morning on the 20th that Rose phoned and I could hear it in her voice before she said the actual words “She has passed the impaction, it has gone”. Oh the relief and the tears! Clever, clever, strong pony!

We dropped off  the last of the packages at the sorting office with hope in our hearts. We had just been gifted the very best of Christmas presents.

We arranged to pick her up on the morning of the 21st. She was all gleaming and spick and span. The students had brushed her clean (she had pulled a few faces at them mind, she is a chestnut mare after all) and she looked wonderful. No trace to remind us of her toils that prompted her arrival. The mud she had been dripping in a few days before was gone. We were worried she wouldn’t load again, having been kept in for days in an unfamiliar place and now with her wits about her, would she know she was heading home? She did. She must have done. Because our little red horse, our fire breathing dragon followed me up that ramp with an attitude of ‘well I don’t like it but I am not staying here!’ 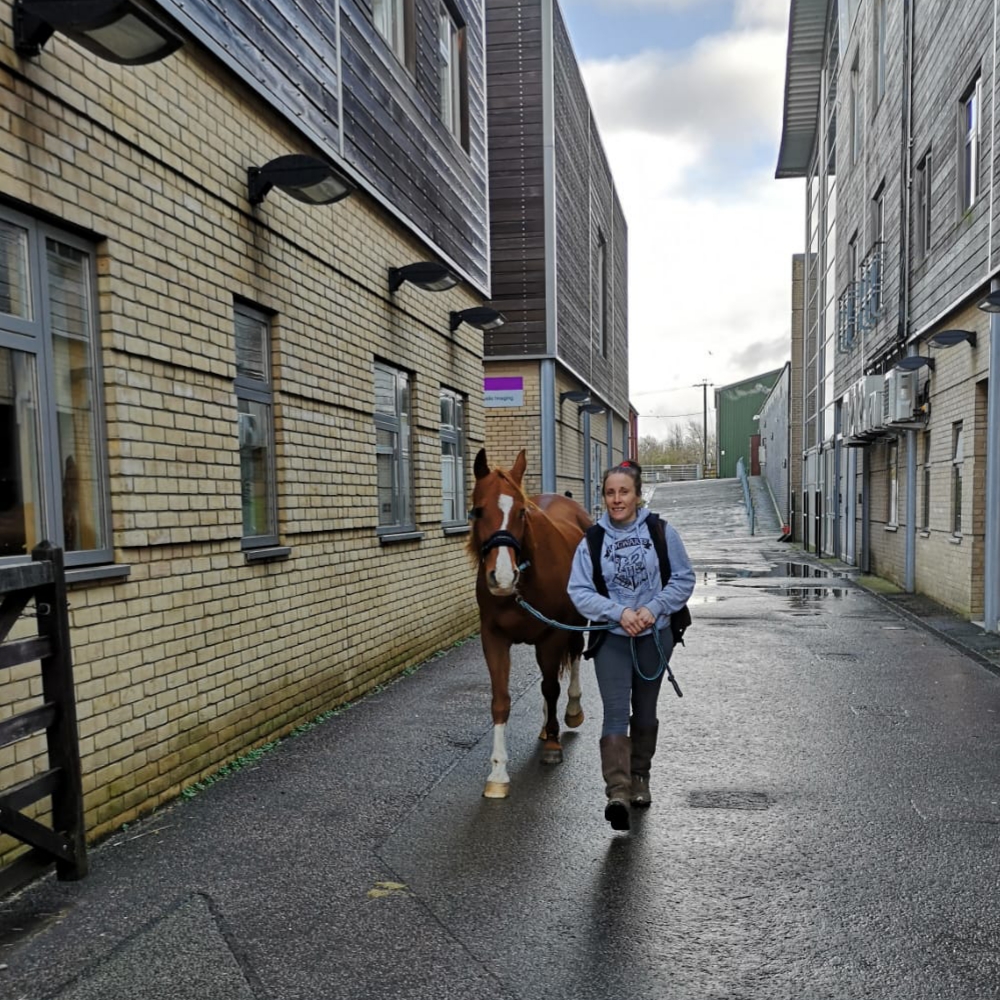 Leaving the RVC but would she go on the trailer?

The sun shone for the first time in days that morning. We took her off the trailer and let her walk the last few minutes home down the farm track. The wind rippled her mane, she strode out with purpose, looking all about her. The sun danced flames along her coat. Our little fire horse back home again.

There is no doubt such a happening makes you incredibly grateful for all that you already have. We know only too well that others are not so lucky as we were this time and our hearts go out to you, they truly do. I don’t know of anything that brings such joy to my heart as our equine friends. Perhaps the heartache they can cause is just the balance that goes with it. We are constantly in awe of an animal that is so strong and powerful. Who carry such hopes and dreams so graciously for us. Who represent freedom and faith. And yet who live themselves a very thin line between their strength and also their fragility.