Our love of all things all things old extends beyond horseshoes and into anything old and rural! Especially blacksmithing tools. 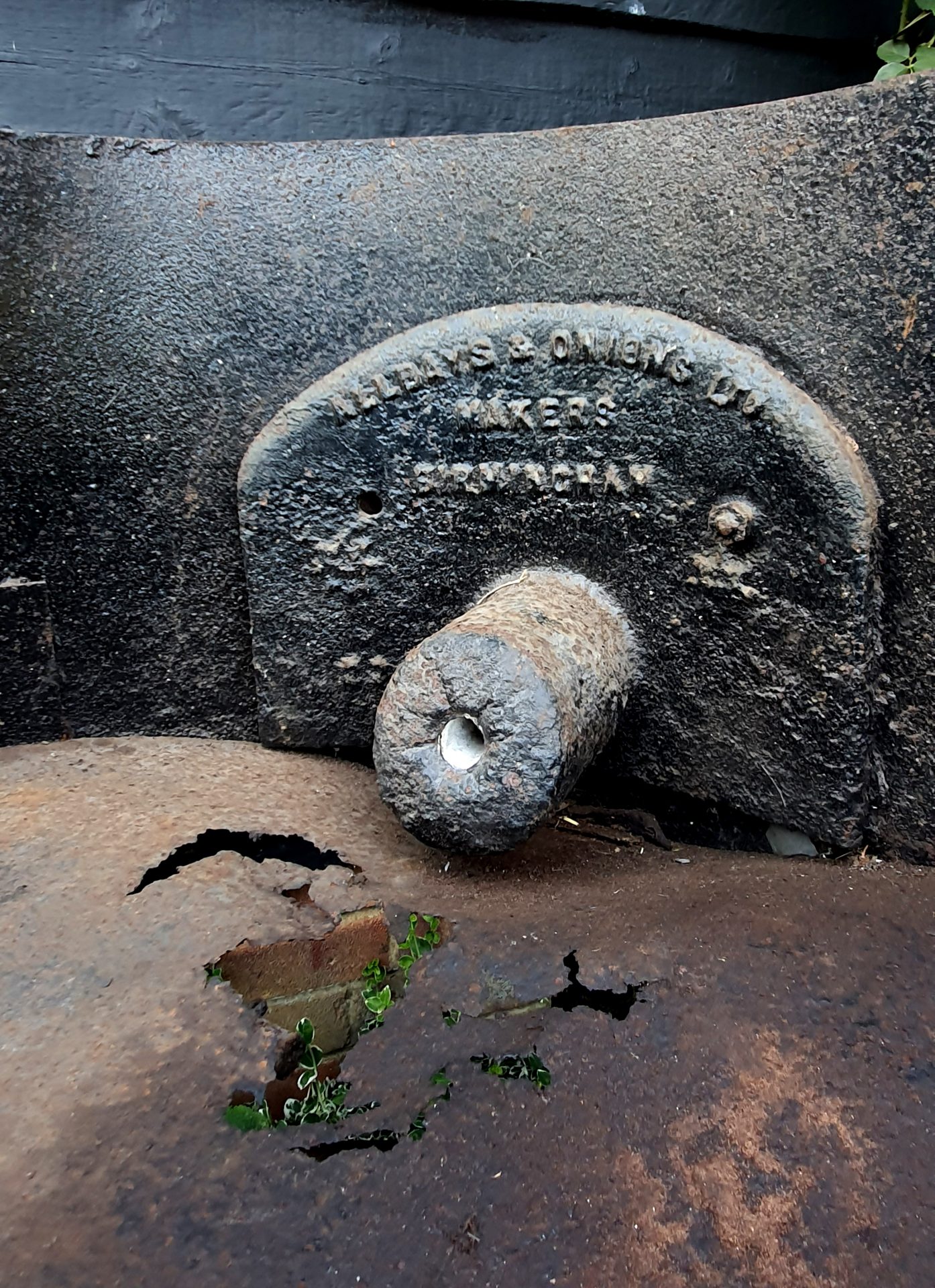 Burnt out hearth plate on an otherwise very good example of an Alldays & Onions forge.

Back in the day before portable gas forges and electric fans for coke and coal forges they used forges with bellows. You need an air supply to get the fire hot and burning. Hence a blacksmith’s forge many years ago would often have a dedicated person to watch the fire and take charge of the bellows to keep it alight and the right temperature, known as a ‘fireman’. There would also have been a ‘Striker’ who would have done the heavy hammer work with the blacksmith himself doing the more detailed and skilled shaping of the metalwork. 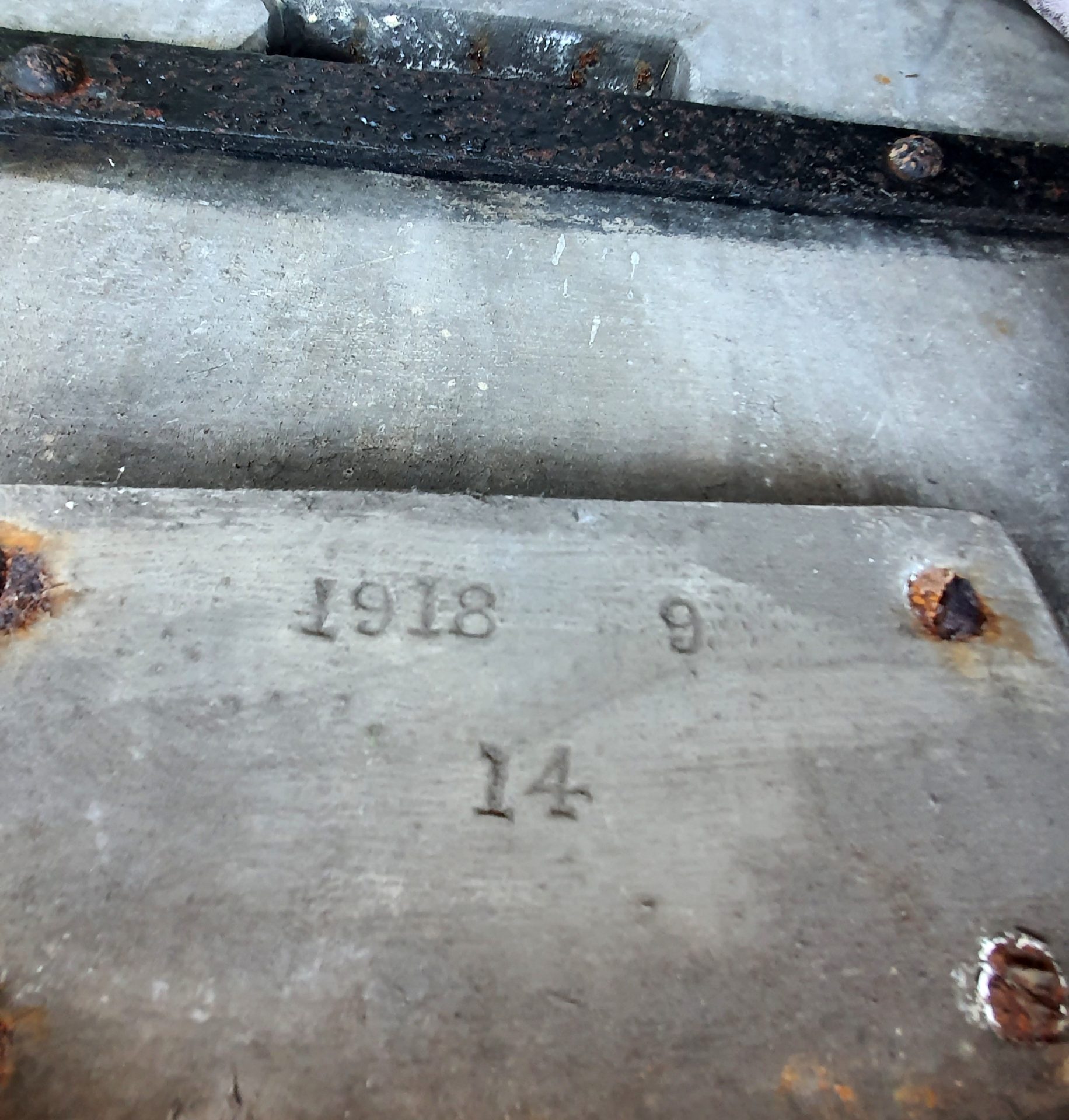 Date stamp on the underside of the forge.

Step in our most recent find who we have named “Jessie”. A Victorian Forge with bellows made in 1918. We came across her advert on Gumtree and despite it being a bit of a trip we made our way to Preston in Lancashire to take a look at her. If you’ve read our blog “A Sheepdog Called Drift” (read that here )you’ll know we’re not afraid of a road trip where necessary!

Aimless anecdote on Lancashire here, please humour me! Neither of us have been there before and on finding out the location we were headed to view her my mind was cast back to my youth! My only prior memory of Lancashsire… when I was younger, much younger! I won tickets, I think from Horse & Pony Magazine, a trip to The Horse of The Year Show with backstage passes! Having a very unhorsey family who would never have thought to buy tickets to such things I was as giddy as the school girl I was at the thought of going!

I remember passing so close by John Whitaker – I couldn’t have spoken even if I had been brave enough to! I’m sure those were the days of the glorious Milton too! I got a rosette signed by Nick Skelton, such a lovely man and met a young showjumper called Nigel Coupe. Bless him for posing for photos backstage with us myself and my two friends, three 14/15 year old girls. The poor guy! I was quite taken with him at the time and remember looking up that he came from Lancashire. Hey, be kind, we’ve all researched and done some fan girl research at some time or another right?! My young self was in awe, as I’m afraid it still remains today, at the thought of living in a ‘proper’ rural area surrounded by horses and countryside! 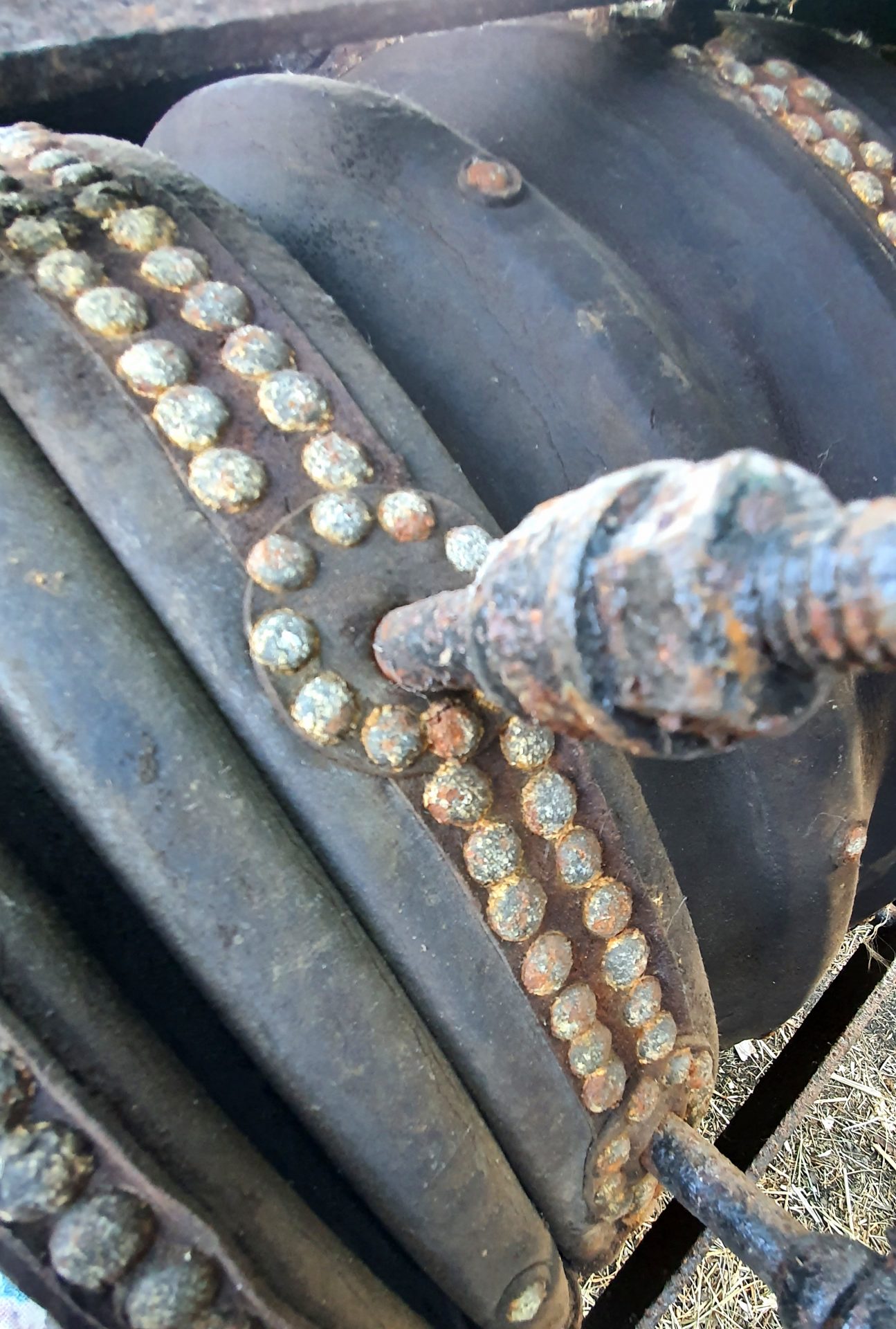 Admiring the studs that hold the leather onto the bellows. Taken at the services on the way home!

Anyway… the drive up to Preston had me recalling all these amazing memories from that Horse of The Year show, I think I’ve only ever been there that once! We gazed again at the gorgeous scenery from the M6 as you head further north and we arrived. I was a little nervous. It was a bit on my insistence that we were going and I think we were both questioning the sanity of it. Sacrificing a Sunday when we were already rushed off our feet with work did require some bloody minded determination. I was worried in case the journey would have been for nothing.

Barry rounded the corner into the yard and saw her first. (She has to be a her, we can’t be the only ones to whom inanimate objects take on personalities of their own?) I held my breath as I followed. She was there waiting on a trolley for her potential purchase.

“Yes” he said. Straight away on seeing her. I was so relieved! And as he depressed and lifted the leaver and her great bellows rose with a big sigh our hearts swelled in our chests. Yes. 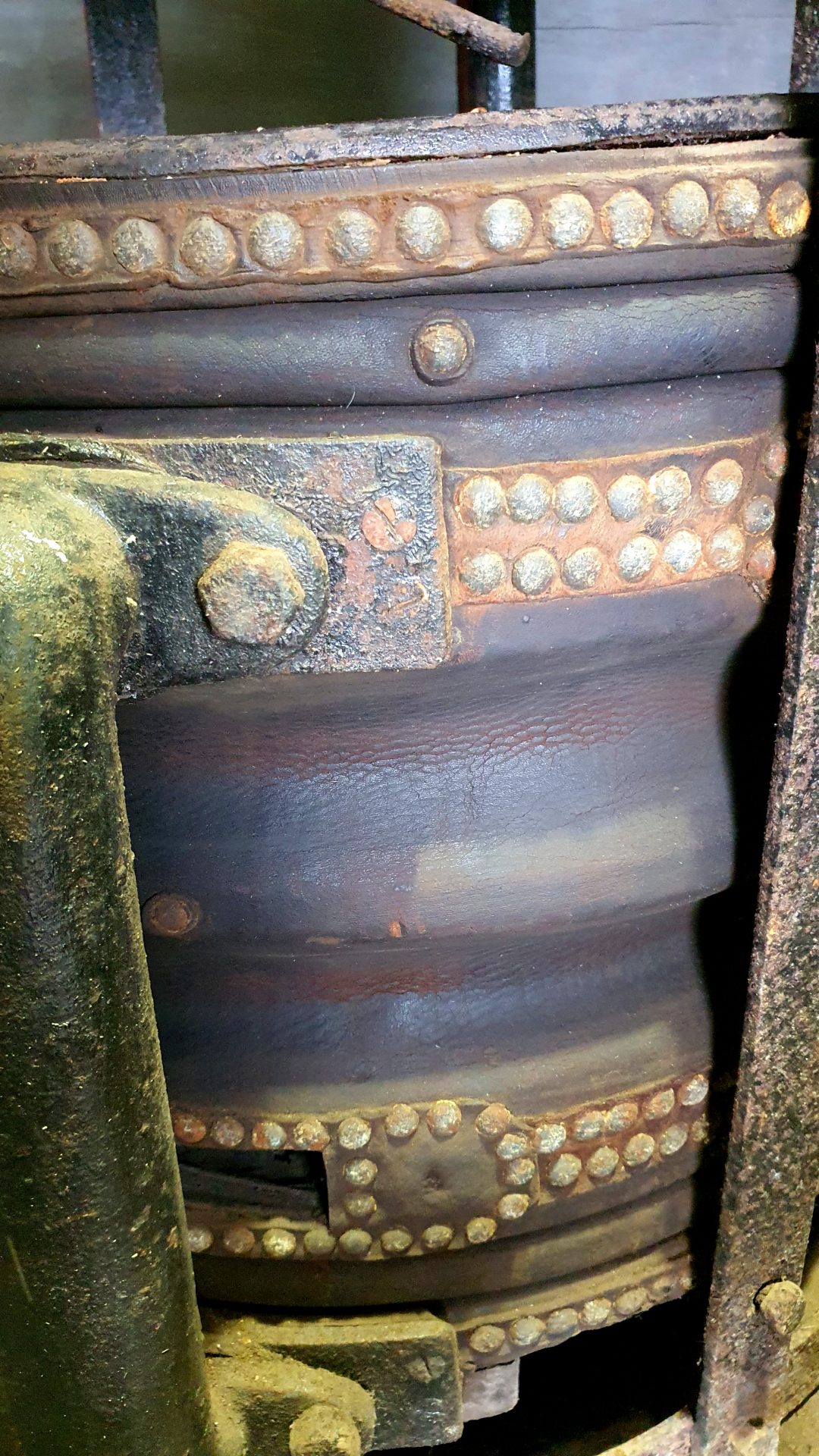 We have begun the cleaning of the leather bellows and will then start on dressing the leather and allowing this to sink in and penetrate and hopefully preserve it for a while longer yet.

In no time at all we were making our way back down to Hertfordshire proud as punch with our new Horseshoe Hearts Team Member lying quietly and stoic in the back. 1918 was the date stamp on her base. She looked in very good condition other than a burnt through hearth plate and seemed to have been fortunate to have been stored under cover for the duration of her redundancy.

She is an Alldays & Onions Forge. This brand we already know of course with them being well known for these forges.  Alldays & Onions were based in Birmingham. Created by a merger between Onions, formed by John Onion in 1650 and William Allday & Co formed by William Allday in 1720. They were well known for their engineering and blacksmithing equipment and even built cars producing their first one in 1898.

Many of the other examples we’ve seen have rotted bellows or with the bellows completely removed and an electric fan installed so we were thrilled to see our Jessie’s still working. The leather does have some cracks and wear so will need a good clean and dressing and fingers crossed they will hold for a while yet! 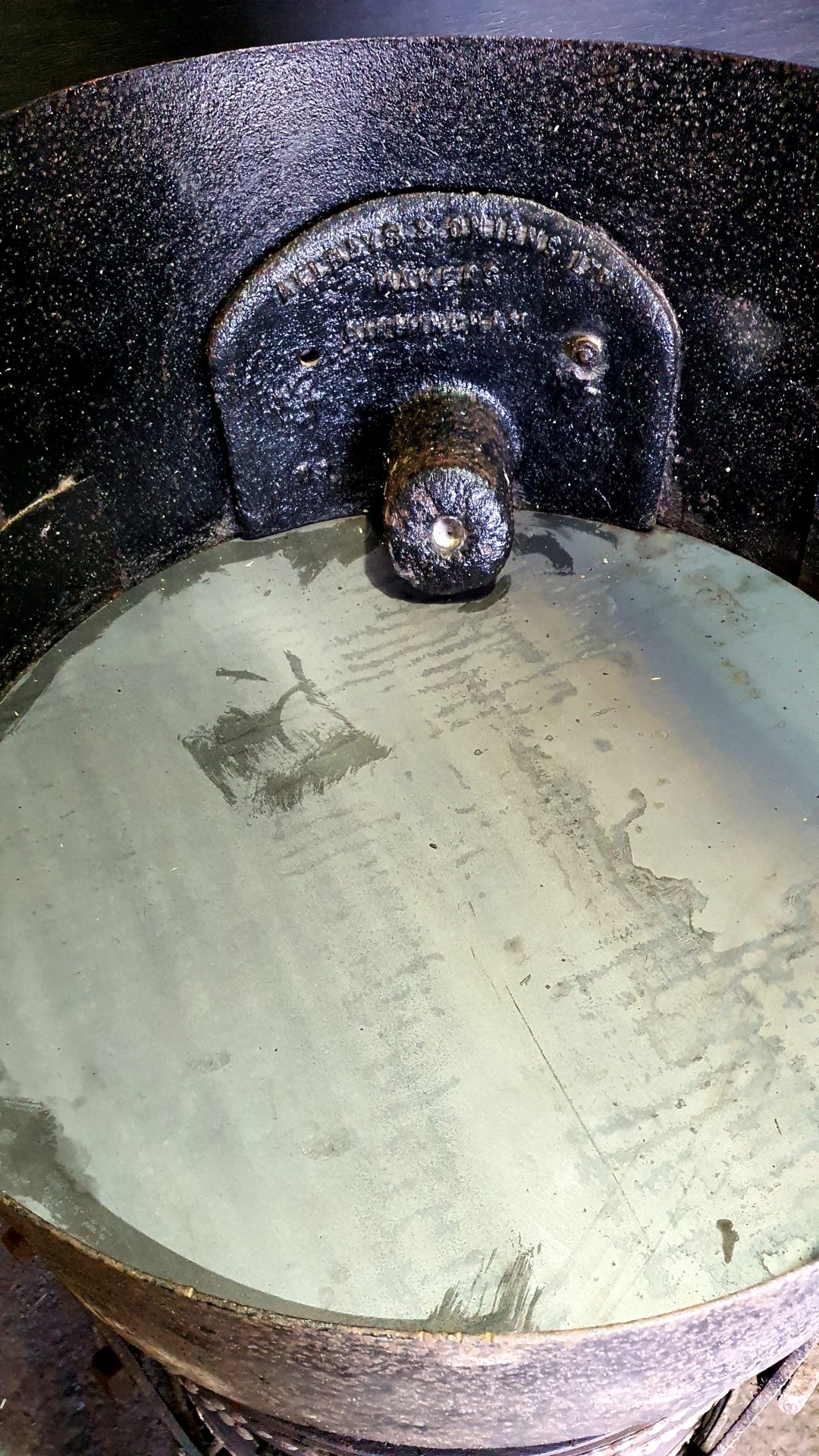 A new hearth plate is in place already!

We have already replaced her hearth plate with a new mild steel round. We are so excited to light a fire in her. We’ve heard a lot about some blacksmiths experimenting with burning maize as a fuel in forges. It apparently burns similarly to coke or coal and will release much less noxious gases into the air when burning. That along with the hand operated bellows, whole more time consuming, will make for a more earth friendly way of forging we hope!

We can’t wait to show you some of her in action but for now please enjoy the images of a fabulous piece of history and welcome our new HH Team member Jessie!